Why maintain the cold chain? Importance and key points

Ensuring the freshness and stability of a beer’s flavour is possibly the greatest challenge any brewer, regardless of its production volume, faces today.

On many occasions, the conditions under which the product reaches the final leg of its commercialization process are totally beyond the brewer’s control, and this point is critical when it comes to guaranteeing the flavour.

Thanks to improved distribution channels, today we can savour and enjoy beers brewed anywhere in the world.  But how does the distribution chain affect flavour stability? How much does the flavour of a beer consumed hundreds or thousands of miles or kilometres away change compared to this same beer served at its place of origin? Is “proximity” in a beer synonymous with a fresh product?

I hope that these lines help you answer these questions for yourselves.

Is related to several factors:

The term ageing is used to describe the changes in the flavour and aroma produced in a beer during its storage in comparison with fresh beer. Although not all beers age equally, and ageing can vary from one style to another, the following changes were described by Dalgliesh in 1977 and can be summarized in the following graph: 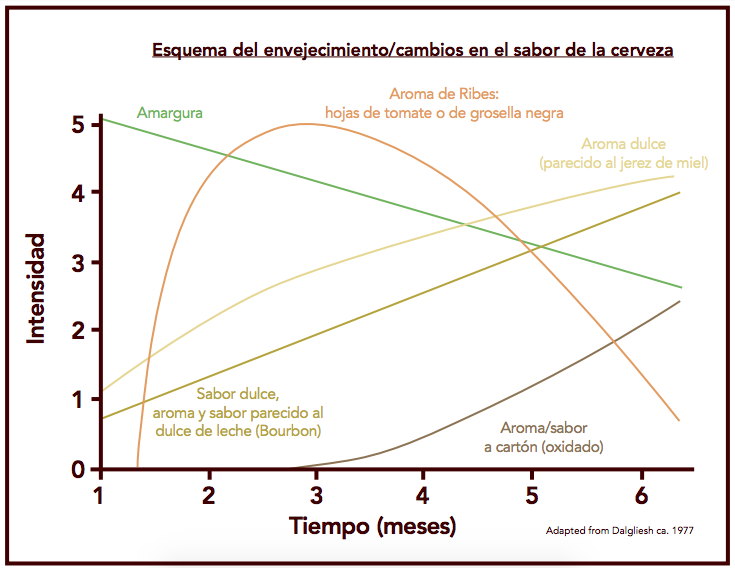 One of the factors that has the greatest impact on beer ageing is temperature; as this increases, so does the kinetic energy of the molecules, accelerating the chemical reactions responsible for ageing of the beer.

According to the Arrhenius equation, keeping the finished beer at a low temperature (between 4 and 7°C) is the only way of slowing down the reactions involved in ageing, such that a recently bottled beer stored at an ambient temperature of 20°C has a useful life (flavour-wise) of 100 days, and storage at 4°C guarantees the freshness of the product for 12 months.

A: frequency of collisions between two molecules with a suitable orientation for a reaction to occur (specific factor for each reaction)

Following this rule, and as we can see on the table, if the temperature is increased by 10°C, the chemical reactions will occur between two and three times faster.  This is a concern when there is a large amount of beer in storage or travelling around the world; if the conditions are not adequate, it is easy to exceed 40°C temperature cycles. Depending on the speed with which the product moves, the probability of it going bad increases dramatically.  The only solution for extending the stability of the product is to maintain the cold chain for as long as possible during its distribution.

This is unquestionably a critical point, starting with distribution, as cold distribution is a hard-to-find service in the countries where the craft segment is still small, and only some of the most specialized distributors are able to offer it. Taking into account that both the investment and the increased energy consumption can elevate the costs by 30% compared to normal distribution, it’s understandable that a distributor will weight the change in its cold logistics cautiously, especially if that investment is going to make its profit margin fall. In this equation, it’s important to also include both the manufacturer and the end consumer, and we should be prepared to pay a little bit more for better service or for a product the peak of its consumption quality.

In the last link in the chain, it is becoming increasingly common to see bars and stores with cold service installations, or specialized stores that little by little are adding more refrigerators. This, no doubt, is the road to be followed to achieve excellence in product quality. Nonetheless, there are many obstacles, particularly economic ones, that make this difficult to achieve. In the case of stores or supermarkets that offer craft beers and where margins are small, the increased energy costs can make it unworkable if their sales volume is on the small side.

As I pointed out earlier, keeping the product cold allows us to extend its useful life, so, if it reaches this final link with its cold chain intact, and assuming that the ambient temperature in stores is 20-25°C, it will not be as critical to keep the product cold if rotation is good and the beer is well made.  The date that matters the most should not be the production date but rather the date the cold chain was broken.

Lastly, from the consumer’s perspective, people often make comments that can lead to error:

Here’s to your health, and happy beer drinking!

Challenges in the sale of craft beverages via e-commerce

The sale of craft beverages via e-commerce sets high business expectations while, at the same time, also posing a series of challenges that the sector...

Agile. A system for R&D in beverages

Have you heard of the Agile methodology? It’s an agile and dynamic system for developing any project, and it’s now being implemented in and...

COVID-19 has changed many habits, and home consumption has grown significantly in response to the multiple restrictions we find all over the world. We...

It has become clear and has been amply demonstrated that the boom in craft beer is not just a passing fad of recent vintage. The interest shown by the...