The growth of the sensitive population, either due to coeliac disease (CD) or non-coeliac gluten sensitivity (NCGS), makes it necessary to limit ingestion of gluten, which is spurring advances in research to develop products that these people can consume safely. Currently, a gluten-free diet is the only treatment for CD.

It is estimated that 1-2% of the world’s population is sensitive to gluten, making it interesting to support this group and improve the lives of these people.

The beer world has taken this need into account, leading to a significant increase in the number of beer brands identified as “gluten-free”.

What is gluten and how to detect it?

Gluten, according to the Codex Alimentarius, is defined as the reserve protein fraction of wheat, barley, oats, spelt, kamut or their cross-bred and derived varieties. These proteins are classified as prolamins and glutelins, depending on the origin of the cereal, and they have specific names. The cereals most used in beer are: 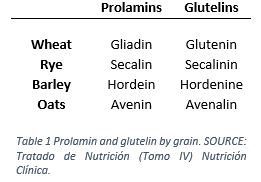 Legislation applied to each country of the world exists for proper labelling that regulates how the ingredients of the food products we consume are to be listed (allergens identified and/or noted), to allow affected consumers to identify which foods they can eat. In addition, Commission Regulation (EC) 41/2009, of 20 January, concerning the composition and labelling of foodstuffs suitable for people intolerant to gluten, regulates the use of the indications:

In some countries, for example Spain, the FACE (Federación de Asociaciones de Celiacos de España) establishes that the threshold of harmlessness for people with coeliac disease is uncertain.

Unequivocal identification of the peptide sequence responsible for the disease is difficult, but there are regions of the prolamins that are resistant to gastric, pancreatic and intestinal enzyme proteolysis. Between these “toxic” regions, there is a fragment made up of 33 amino acids, 33-mer, which has six epitopes for the T-lymphocytes, which potentially make it more immunogenic.

Currently, the only method for determining the gluten content of foods endorsed by official bodies, such as AOECS (Association of European Coeliac Societies), is the R5 ELISA method (enzyme-linked immunosorbent assay), which is capable of quantifying gluten with a detection limit of 3 ppm.

There are various alternatives for obtaining a beer that contains no gluten or very little: