Bubble Tea, the tea-based drink that’s in the industry’s crosshairs

Bubble tea is one of the drinks that has been causing a sensation recently. Its texture and consumption experience, different from other liquids available up to now, are why this new option is taking positions in the market. Let’s look at what it’s made of and why it’s in producers’ crosshairs.

Bubble tea, the exotic drink that’s trending at the moment

The fact is that bubble tea, also known as “pearl milk tea”, “tapioca milk tea” or “boba tea”, has become a worldwide trend, especially among young people and teenagers. The beverage industry, always alert to the preferences of any market niche, isn’t wasting any time. If bubble tea is what people like right now, it will be produced in large quantities. The real bubble tea revolution has really arrived.

It’s a drink that originated in Taiwan (sometime in the 80s, with rapid expansion in the 90s) that subsequently spread to places like Canada, even New York’s legendary Chinatown, Europe and the rest of Asia. Despite the name, it is by no means a typical tea but, strictly speaking, it’s not a soft drink either. It’s more “sublime”, different from any other product, and its main appeal lies in its exotic nature.

Its base is tea, of course, tea that is especially selected in each case (normally green or black), to which a variety of bold, sensational and, above all, fun flavours can be added. It can be mixed with fruit, juices and yoghurt or milk, contains tapioca pearls, and is flavoured with different jellies, sugars or sweeteners.

There are more than 200 varieties of bubble tea. It’s typically served in a glass or plastic cup and with special straws that are slightly wider than usual to allow full enjoyment of the bubbles and savour the tapioca or jelly pearls.

The market for bubble tea, as appetising as its bubbles

The bubble tea market has been growing exponentially in recent years. According to Verified Market Research, in 2020 its volume was valued at an estimated 1.9 billion dollars, and this is expected to grow by 7.8% between 2021 and 2028 to reach 4.34 billion USD that year. It is unquestionably becoming a rich vein for industry and producers. 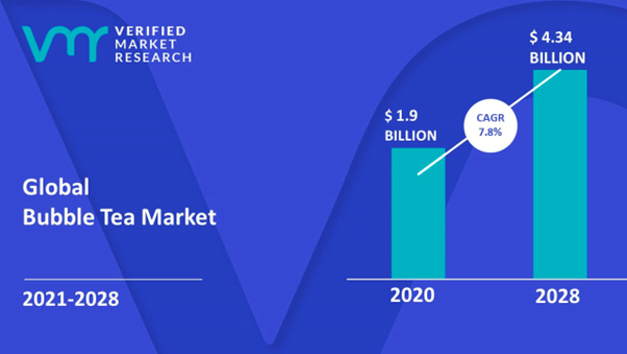 It has gained great popularity, especially through bars and cafés in Southeast Asia. 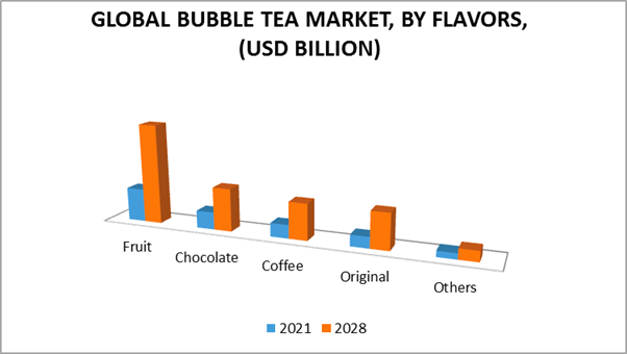 The global bubble tea market is basically dominated by a handful of companies that have released their own versions.

Sharetea started up in 1992 in Taipei and now has more than 500 stores in 15 countries.

Then there’s Happy Lemon Bubble Tea, which was founded in China and now has more than 1500 establishments.

This is a company in the UK that supplies and distributes to bars and establishments specialising in bubble tea. It offers a wide variety of mixes, like Wild Monk, that are easy to use, vegetarian, gluten-free and naturally flavoured.

It also has another very complete range of products with a wide variety of flavours. 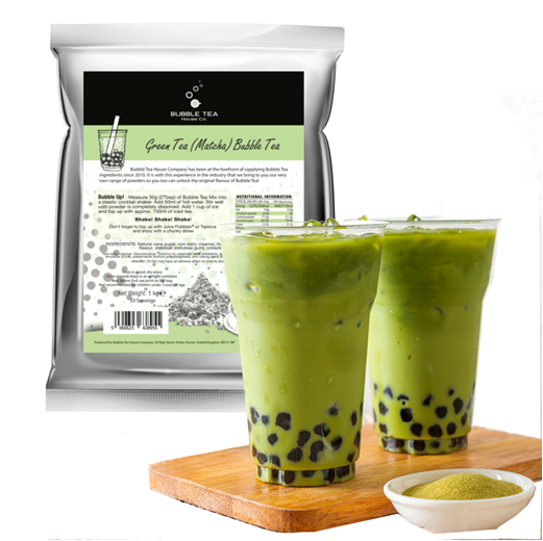 The United States has two areas with significant Taiwanese-American populations: California and New York, two of the cultural epicentres of bubble tea in America. To list just some of the most important companies in the U.S., we have Kung Fu Tea, which was founded in Queens (New York) in 2010 and now has around 250 outlets.

The Boba Guys and Tapioca Express are based in California.

The challenge of producing bubble tea: the sugar

It’s clear that people like the bubble tea formula, and they like it a lot. It can be compared to ice cream in the sense that it’s nearly impossible to square the sugar it contains with the healthiest dietary trends. It’s delicious and people keep eating it. Let’s just say that something similar is happening with bubble tea, but it’s true that consumers are increasingly looking for healthier and sugar-free formulas.

That’s why analysing and looking for higher-quality ingredients is essential in their formulation and production, as the raw materials make all the difference.

Bubble tea is more than just a simple recipe; it can become a work of art striving for that perfect, lump-free texture.