Beer without gluten or how to reduce it

There are various alternatives for obtaining a beer with little or no gluten.

Among the raw ingredients we are going to use to make beer, we need to consider the grains, as these are what have the potential to supply this allergen.

The gluten-free cereals currently used the most are sorghum, rice and corn. To brew beer using a cereal other than barley, we have to know the differences between the grains.

For example, if we choose sorghum, the differences with respect to barley are the following: 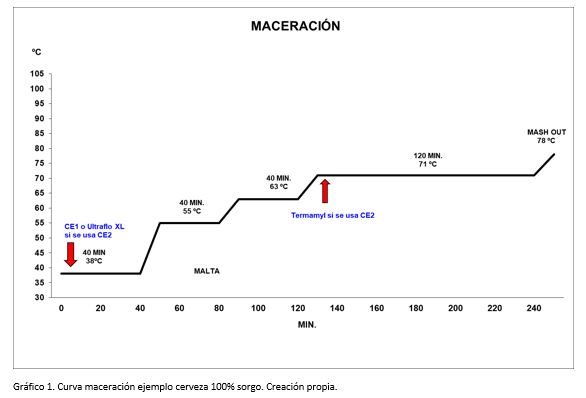 We also must take into account whether the grain selected for brewing has a hull, because if it does not, rice hulls can be added to help filter the wort.

Filtering, boiling and fermentation would be similar to that of a gluten-containing beer; the only recommendation is to add some type of nutrient to enhance fermentation.

Use of chemical additives or pantented techniques

Brewers Clarex, a proline-specific endopeptidase (entoprotease) obtained from A. niger can be used to break down the “toxic” segments of the gluten. It is added at the start of fermentation in the following doses.

This is also a stabilizer that recognizes the proteins responsible for chill haze.

Although, it should be noted that the results are better if accompanied by a beer brewing process designed to reduce the protein content (vigorous boiling of the wort, long mashing time at a low temperature and filtration of the beer).

Some brewers use silica gel (SG) during fermentation. This makes it possible to further reduce the gluten without significantly changing the nutritional value of the yeast in the beer. Furthermore, it promotes the reduction of polysaccharides, improving filtration.

Hydrodynamic cavitation (HDC) is a physical process that is very similar to boiling; the difference is that cavitation is caused by a drop in the pressure of the fluid below the vapour pressure, whilst boiling accomplishes the same thing above the local ambient pressure.

It has been demonstrated that hydrodynamic cavitation is effective both during mashing and at the start of fermentation. The pressures achieved in this process alter protein complexes (like proline), and the formation of oxygen in the fermentation mixture enables the enzymes and yeasts to break down the proline.

Supporting this idea is the discovery that proline displays high assimilation by certain strains of yeast, particularly under high-stress conditions due to the dearth of the most easily assimilated amino acids.