Canned wine, just as it sounds. It seemed like it could never happen, but this new and surprising format for enjoying the ‘drink of the gods’ has hit the market as an alternative to the traditional one, although wine aficionados no doubt still prefer it bottled and served in a glass.

Certain aspects like convenience account for canned wine catching on in specific consumption moments. Let’s look at how canned wines are defined and some of their most important advantages, what is putting them on supermarket shelves and in eating and drinking establishments.

It’s a question of adapting this beverage to a convenient format in order to satisfy the needs of a very specific segment of the population that tends to drink wine from time to time, among other beverages, or perhaps also as an opportunity to capture other groups that are already consuming more refreshing beverages like beer and, through this new option, may expand their preferences.

It seems to be working because, whether as a novelty or for simple convenience, especially in the summer, the global canned wine market is growing 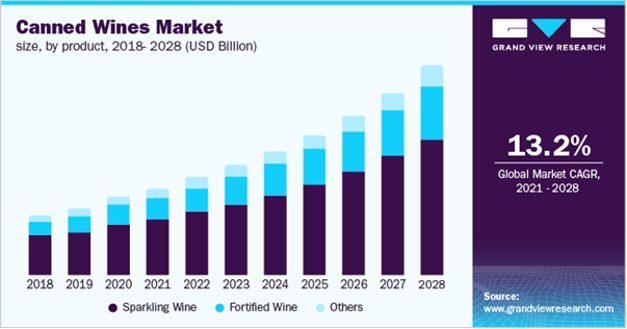 However, there are still challenges related to both the quality and price.

Its cost is relatively high, and finding wines of superior quality is not easy. You have to focus on small producers who create unique wines that are also capable of exciting the palate even when in a can.

The challenge of Spain, a country with a long winemaking tradition

While canned wine has been well established for some time in other countries like the United States, South Africa and Australia, and is taking off in countries like South America, Portugal, United Kingdom, Germany, Italy and France, in Spain wine in cans is a product that still has a long way to go.

This is a region with a long winemaking tradition, especially in certain areas, such as the north, where, although cans are accepted for a wide range of beverages such as beer, soft drinks and other options, they are rare in the case of wine.

This is because the can is associated with a loss of quality and authenticity in people’s minds.

But, when you think about it, why would this be the case? In principle, there is no significant or objective reason according to experts and winemakers.

And everything points to canned wine eventually enjoying the success it deserves in Spain as well. There are plenty of good reasons, like the climate (Spain has many months of heat and good weather) and there are many settings, like the beach or the swimming pool, where drinks cannot be consumed in glass containers.

Canned wine offers multiple advantages that will make it a must in the beverage market.

One of the main advantages of canned wine is its convenience.

This is a format that’s lightweight (it’s typically presented in 187-, 250- or 330-ml sizes) and easy to store and transport, and it can be enjoyed anytime, anywhere.

These are characteristics that can help free it of its aura of impenetrability and the exclusivity that makes people think that wine is only for certain occasions.

Besides that, it can be chilled quickly and doesn’t require a corkscrew for opening.

The can is a format that can be made of aluminium and is 100% recyclable. And, since it weighs less, fuel is saved in its transport.

In a can, wine lasts longer because it’s hermetically sealed and protected from light, and that avoids the greater exposure to oxidation that affects wine in the traditional bottle format.

Most canned wine formats are for individual consumption and therefore avoid the waste of leaving behind an unfinished bottle when only one person in a group is drinking wine.

5. Canned wine is surprisingly good and of high quality

Another reason is that this format can be adapted to all types of wine, including sparkling ones, sangrias, spritzers and variants of vermouth, and to wines with alcohol contents ranging from 0% to 14%.

1. In the United States…

The United States, as with so many other novel products, has been manufacturing and marketing the canned wine option for some time.

2. Boom in the United Kingdom

Although to a lesser degree than in the U.S., the canned wine category in the United Kingdom has experienced exponential growth in recent years. Off-Piste Wines has more than half the market with some categories like the new PinotPinot spritzers range.

Broadland Wineries, with its Minivino brand, is another that has taken the plunge.

3. Some examples in Spain

Although the winemaking sector has it the easiest, the beverage industry doesn’t want to let this opportunity go by, and some Spanish wineries and other beverage makers have now jumped on the canned wine bandwagon.

Some well-known ones like Raventós-Codorníu have done it by replacing sparkling wines with the spritz formula.

Grupo Entrecanales Domecq e Hijos has opted to can one of its best-known names, its Peñascal rosé, to expand its market.

Another big name that is diving into this segment is Zeena, which is using its organic grapes from the Terra Alta region (Catalonia) and is a pioneer in adopting the can format.